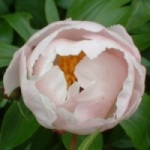 Mrs. Flanders's Peony stretched along the porch of her cottage half a mile down the road, where for decades it opened earlier than other local peonies, often holding its blossoms well into July. When the cottage was razed to make way for a road, the demolition-contractor allowed its roots, occupying more than six cubic yards underground, to be moved to Coos Riviera gardens, where it has been grown and propagated ever since.

Identified as the lactiflora cultivar 'Dresden,' the peony proved well suited to local climate, usually flowering the year after division, then increasing rapidly.

In 2005 the American Peony Society convened in New England, where an unusually wet spring delayed most peonies. Mrs. Flanders's bloomed anyway, and as some exhibitors struggled to open tardy flowers with hairdryers, three perfect flowers from Mrs. Flanders's peony quietly earned the blue ribbon for pink, single-form peonies. Back at Coos Riviera gardens, Mrs. Flanders's 'Dresden' reminds us of the endurance and grace of these beloved plants.