Touring peony gardens during bloom season, you may notice that some mature peonies sport smallish, brown buds about the size of peas. This condition is bud blast. 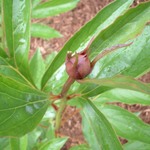 Bud blast is the plant’s response to stress of any sort. It is most common in newly divided peonies, which had already set buds by the time they were divided and transplanted the previous fall. As the plant’s root-building clock was reset, the plant did not have the resources to develop the buds it had set, so its energy was directed to stem and foliage production, and the buds blasted.

As long as the blasted buds do not contract fungus or mold, they are harmless, and the plant will continue to develop normally and produce well at maturity, two or three years after division in most cases. 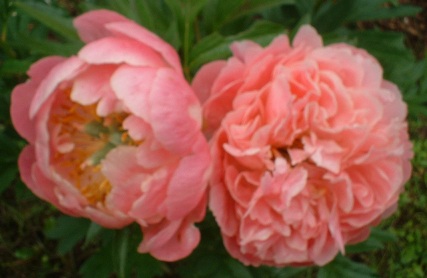 There can be a benefit to bud blast, however. When the plant is supporting fewer flowers, all its resources are directed to those flowers, which are often larger and more spectacular than usual, as in this Pink Hawaiian Coral, usually a semi-double flower (on left) but sometimes also fully double (on right)!